Tequila is the modern name for a regional mezcal born in the Jaliscan valley of the same name. It is made from a single subvarietal of agave – A. tequilana Weber, blue variety – commonly known as the blue agave. While tequila was the first mezcal to become widely know outside of Mexico, since 1974 it has not legally been classified  as a mezcal. 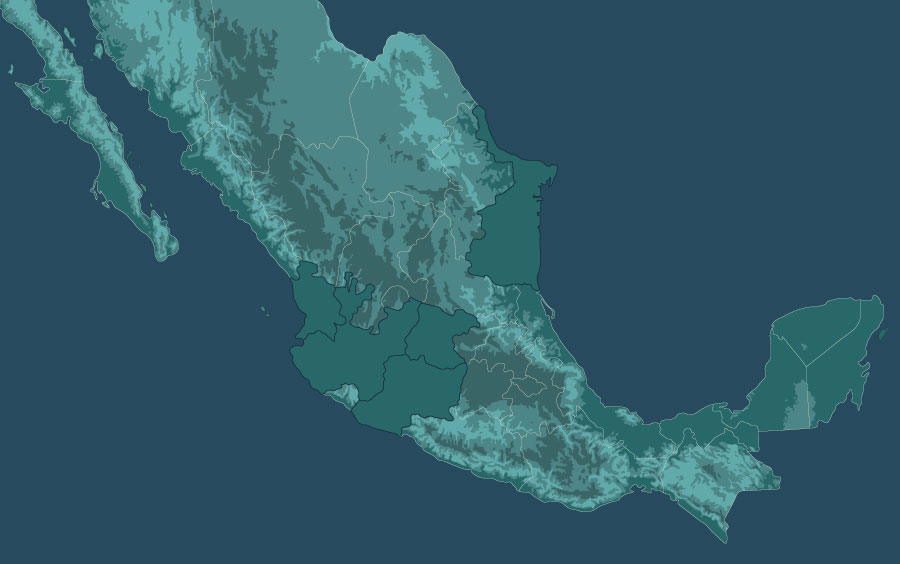 Denomination of Origin for Tequila

Like Scotch, Cognac and Champagne, tequila is a “Denomination of Origin” beverage, meaning that it can only legally be produced in a certain region of the world. The Mexican state owns the right to the word “tequila,” and determines the territory where it can be produced. The tequila DO includes the entire state of Jalisco, as well as parts of the states of Guanajuato, Michoacán, Nayarit, and Tamaulipas. Jalisco is the birthplace of tequila, where the vast majority is still made.

Tequila is arguably the most highly regulated distilled spirit on the planet. Its categories and classes, along with many other rules, are defined in a “NOM” (Norma Oficial Mexicana), or set of regulations established by the Mexican government. This “Norm” is interpreted and enforced by the CRT (Consejo Regulador de Tequila), which monitors every part of the tequila-production process, from planting the agave to bottling. They also test and keep samples from every single batch of tequila. 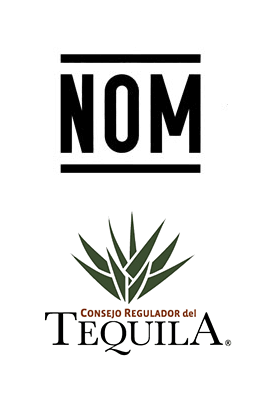 Not all tequila is created equal. There are two categories: plain ol’ tequila (sometimes called mixto) and 100% agave tequila. Purists insist on the latter, whose only source of sugar (and therefore alcohol) is the blue agave. These tequilas tend to be more flavorful and less likely to produce a hangover. “Mixtos” are so named because their sugar source is mixed. Up to 49% can come from any non-agave source – cane sugar, beet sugar, even high-fructose corn syrup! Whether 100% agave or mixto, all tequila falls into one of the following five classes…

Also called “silver” or “plata,” blanco tequila is generally bottled soon after distillation. It is the most traditional class and the purest expression of the art of distillation. Traditionally and usually unaged, blanco tequila may be in contact with oak for up to 60 days. These tequilas should feature cooked agave aroma and flavor.

Called oro or joven in Spanish, this class of tequila is often a mixto. In such cases, it is simply a blanco with flavor and color additives. When it is 100% agave, it is a blend of blanco and one or more other classes of tequila.

Meaning “rested,” reposado tequila spends a minimum of two months in an oak vessel of any size, from barrels to large tanks. At their best, reposados balance the boldness of a blanco with the vanilla and caramel notes of toasted oak.

These  tequilas take their name from the Spanish word for year (año), and all añejos must spend at least that long in oak barrels no larger than 600 liters. Usually, the barrels will have been previously used  for whiskey. The result is typically an oaky tequila with a long, complex finish. Añejos are often favorites of Scotch and other whiskey drinkers for this reason.

“Ultra-aged” tequilas spend a minimum of three years in oak barrels. Oak notes tend to dominate, and extra-añejos with perceptible agave aroma and flavor are coveted. After three or more years in Jalisco’s arid climate, the “angels’ share” lost to the barrels can be quite high, making this the most expensive class of tequila. 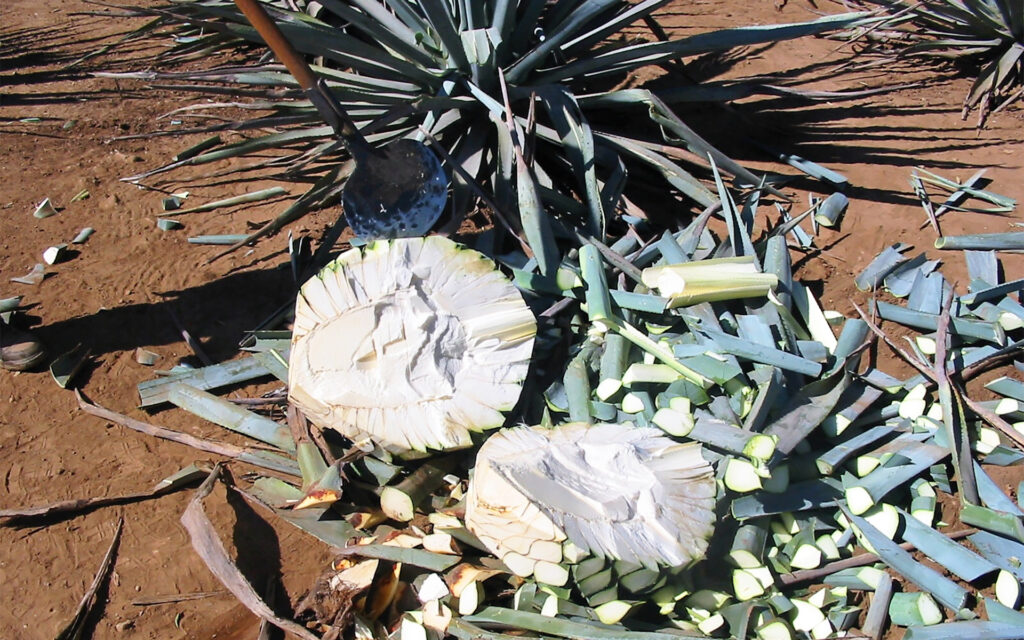 Tequila is made with a single agave varietal – Agave tequilana Weber, blue variety. This succulent can take anywhere from five to ten years to reach maturity. Blue agaves are harvested by skilled field workers called “jimadores.” Among the jimador’s tools is the coa de jima – a razor-sharp circular blade attached to the end of a long wooden staff. Using the coa, the jimador slices off the spiky agave leaves, or pencas, and severs the root. What’s left is the piña, the stem of the plant that resembles a giant white pineapple. Piñas from healthy, mature blue agave can weigh over 100 pounds. 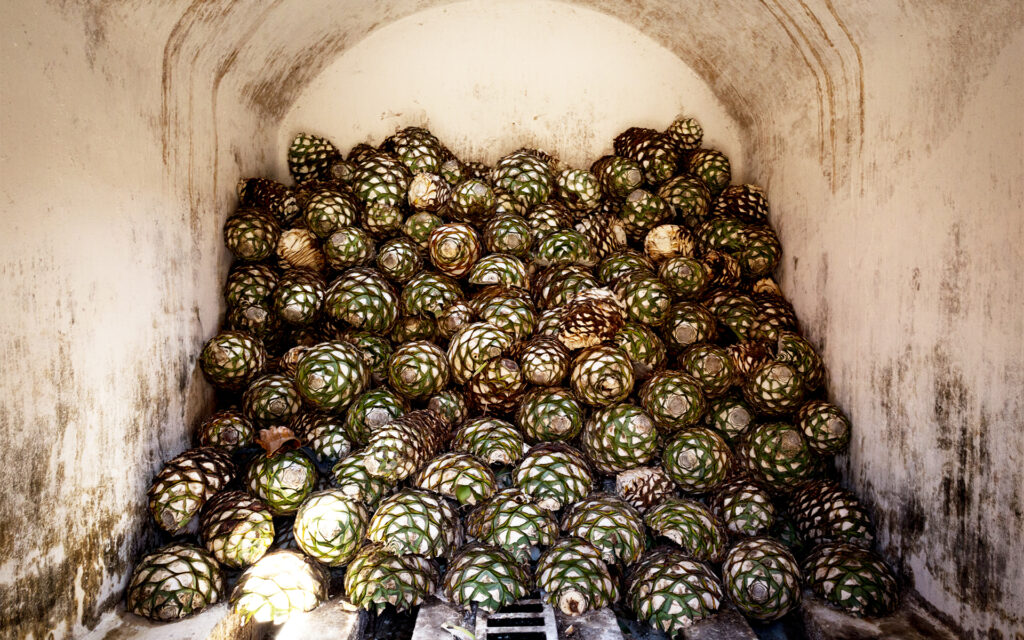 The blue agave is chock-full of complex carbohydrates called inulins. This must be hydrolyzed to convert them into simpler, fermentable sugars. This is usually done thermically – cooking with steam in either brick ovens or stainless-steel autoclaves. A few tequileros have returned to the original method of cooking agave, with indirect heat in underground pits. Hydrolysis can also be carried out chemically or enzymatically by means of a diffusor. 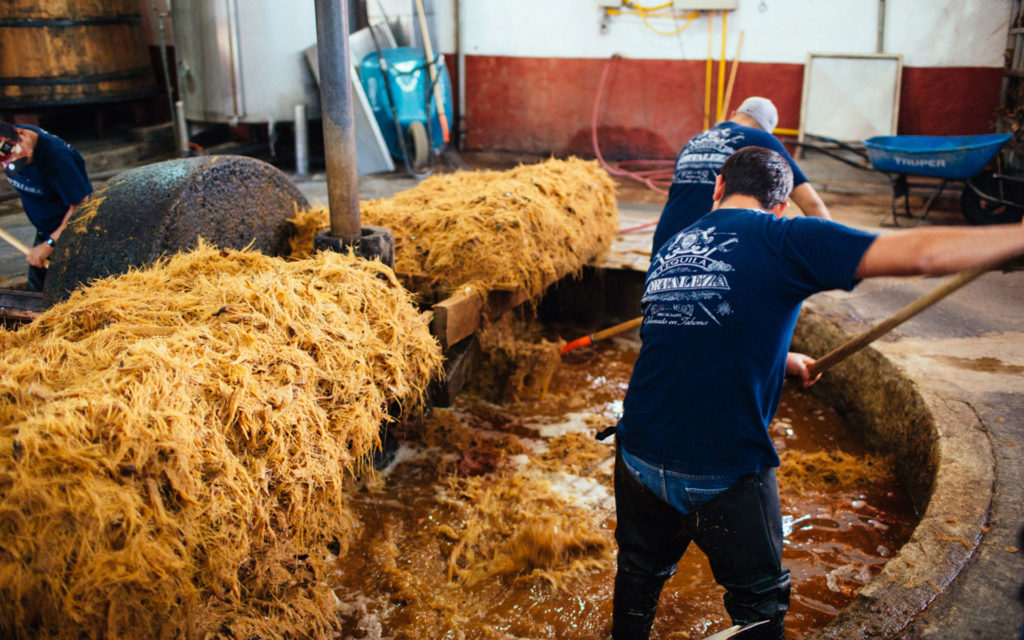 Once the agave has been cooked, its sugar must be extracted. Generally speaking, the agave is going to be crushed and rinsed to separate sugar from fiber. In most processes, this is done with a series of roller mills. A few producers use a tahona (a large stone wheel) for extraction. 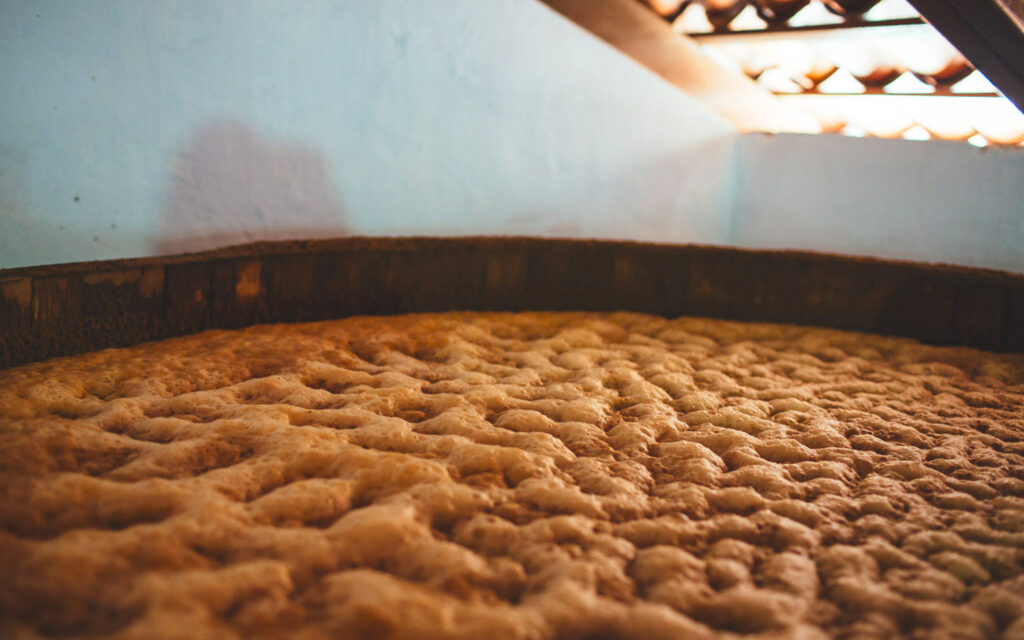 The sweet liquid that has been extracted from the cooked agave is called aguamiel (honey water). It will be diluted and pumped into large vats or tanks. This is where yeasts will ferment sugar into alcohol. Fermentation also involves the creation of dozens of other compounds that will add aroma, flavor and body. The mosto (“must”) resulting from fermentation can be thought of as something like an agave beer. 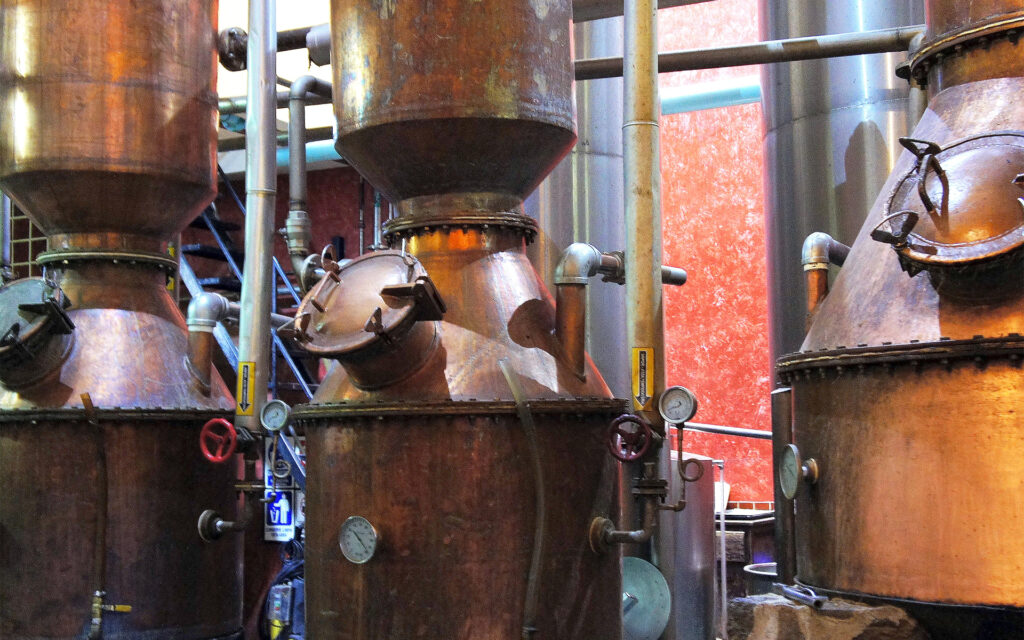 The low-alcohol mosto will now be distilled, separating ethyl alcohol and certain flavor compounds from water, solids, and undesirable elements. Tequila can be distilled in alembic pot stills or in more modern distillation columns. In the case of alembics, it will be necessary to distill the tequila twice. The first distillation will yield a cloudy liquid called ordinario (“ordinary”), which is about 20-25% alcohol by volume. Re-distilling the ordinary will give us blanco tequila, which must be between 35% and 55% alcohol by volume. 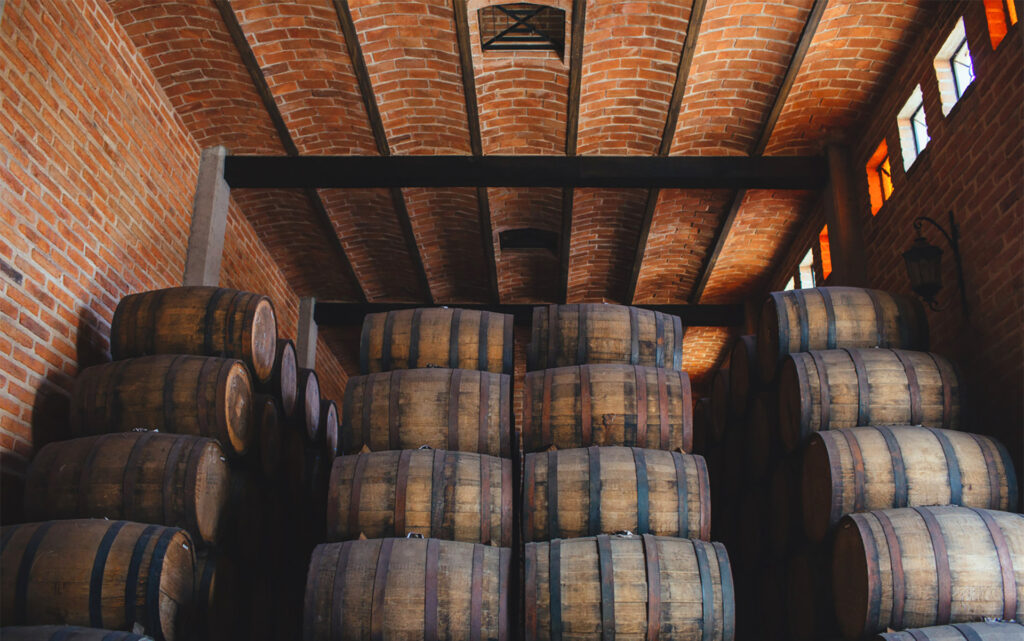 To make reposado, añejo, or extra-añejo tequila, we need some kind of oak vessel. Tequila is most commonly aged in American whiskey barrels, which were used only once. But the Norm allows for any type of oak. New barrels are used, as are French, Canadian, and Hungarian oak. Barrel aging imparts color, aroma and flavor, while allowing the tequila to “breathe” and soften with time.

Añejo tequila: Tequila aged at least one year in oak barrels of no more that 600 liters.

Blanco tequila: Tequila with no more than 60 days of contact with oak.

Caballito: “Little horse” – tall, thin Mexican shot glass that evolved from the cuernito. While not appropriate for serious tasting, they are staples of cantina drinking.

Column distillation: Also called continuous distillation. Process in which liquid is pumped  through a column containing various metal plates, resulting in multiple distillations in a single pass. The process can be operated without shutting down between batches, and can result in much higher alcohol yield.

Extra-añejo tequila: Tequila aged at least three years in oak barrels of no more than 600 liters.

Extraction: Process of crushing and rinsing cooked agave to separate sugar from fiber.

Formulation: Process of preparing aguamiel for fermentation. May involve dilution, the addition of mieles dulces, other sugars, and/or yeast.

Gold tequila: Also called oro or joven. Usually a mixto containing caramel color and flavorings. 100% agave golds are a blend of blanco and one or more other classes of tequila.

Heads: Liquid condensed and collected at the beginning of distillation, before the first “cut” has been made.

Horno: “Oven,” in Spanish. Refers to the brick ovens used by many producers to cook agave.

Hijuelo: Rhizomes that grow from the blue agave. Clones of the parent plant, they are pulled up and re-planted in the spring.

Mieles dulces: “Sweet honeys” – cooked agave syrup that is extracted from ovens and autoclaves. It can be used to raise the sugar content of aguamiel during formulation, or to start fermentation.

Mieles amargas: “Bitter honeys” – dirty water that runs off agaves during the first few hours of cooking in ovens and autoclaves. It is generally extracted and discarded with the vinazas.

Mixto: “Mixed,” referring to the sugar source of any non-100% agave tequila. The term is not recognized by the CRT, and does not appear in the Norm or on tequila labels.

Mosto muerto: “Dead must” – the result of fermenting aguamiel. Essentially agave beer, this is what will be distilled.

Ordinario: The result of a single pot distillation of mosto muerto. Usually 20-25% alcohol by volume.

Pot distillation: Also called alembic, Arabic or discontinuous distillation. Distillation in which a “pot” at the base of the still is filled with liquid and distilled. The process must be stopped and re-started for each batch of mosto muerto or ordinario.

Quiote: The inflorescence (flower stalk) that some agaves grow upon reaching maturity.

Reposado tequila: Tequila “rested” in oak for at least 2 months.

Rollermill: The most common machine used for extraction. A modified sugar cane mill.

Sangrita: “Little blood” – traditional Jaliscan accompaniment to tequila, made in dozens of different ways, but always with a base of acidic fruit juice.

Tails: Liquid condensed and collected toward the end of distillation, after the second and final “cut” has been made.

Vinazas: “Stillage” or “vinasse” – the combined liquid waste of the tequila-making process.

Vino: “Wine” – traditional term for liquor, including tequila, in Jalisco.