Mezcal has two equally valid but contradictory definitions. Traditionally, a mezcal is any Mexican agave distillate. The word derives from the Nahuátl metl ixcalli, meaning “cooked agave.”  This broad historical definition still holds for millions of people in Mexico. However, in 1997, mezcal was granted Denomination of Origin (DO) status, greatly restricting legal and commercial use of the word. We recognize and respect that mezcal is made in nearly every part of Mexico. Here, we will be focusing on certified mezcal from within the DO region. 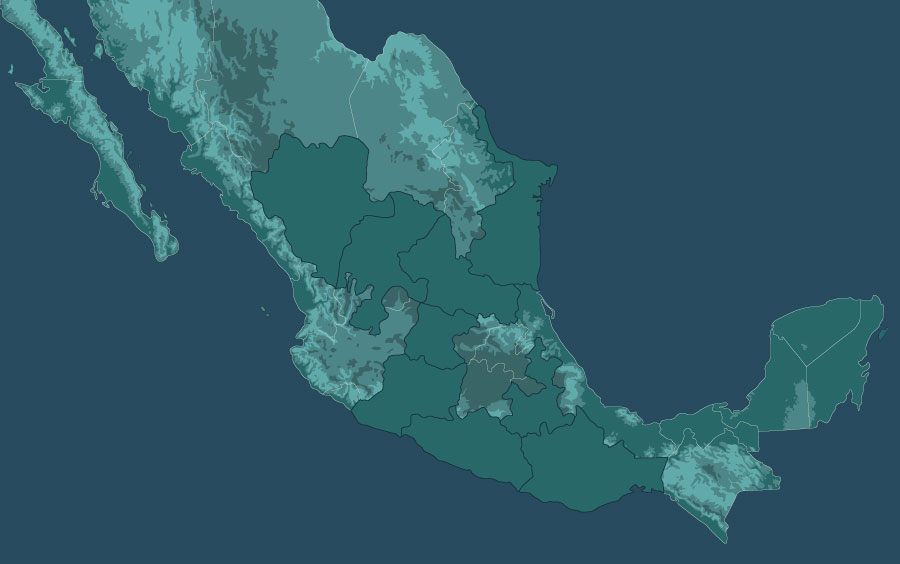 Denomination of Origin for Mezcal

Currently mezcal can be legally produced in only nine Mexican states, and must be certified by the Consejo Regulador del Mezcal (CRM). While DO status has been a net positive for many mezcaleros, hundreds of traditional producers fall outside the DO and are legally prohibited from calling their mezcal by its name. The states in the DO are Oaxaca, Guerrero, Puebla, Michoacán, Tamaulipas, Guanajuato, Zacatecas, Durango, and San Luís Potosí.

Certified mezcal is defined and classified by a Norma Oficial Mexicana (NOM) on mezcal. Per the Norm and tradition alike, all mezcal is 100% agave/maguey – no other sugar source may be added during fermentation. The Norm establishes three categories of mezcal, which are broken down further into six classes.

The first category is referred to by some critics as “industrial mezcal,” since it allows for modern production methods imported from the tequila industry. At the extreme, these mezcals can be produced by cooking the agave in autoclaves, extracting the juice with a diffuser, and distilling in a stainless-steel column.

The vast majority of certified mezcal falls into this category. The use of autoclaves, diffusers, and column stills is prohibited. A typical artisanal process is described below (in “Mezcal Production”).

In this category, the maguey must be pit-cooked and mallet-crushed or stone-milled. Distillation must be in clay pots, and stainless steel is prohibited.

Unaged and unadulterated, the vast majority of mezcal falls into this class.

“Matured in glass” – mezcal stored in glass for over twelve months, underground or somewhere with minimal variation in light, temperature, and humidity. Storing in glass (especially buried underground) is a traditional practice that softens the mezcal over time, without lowering the alcohol content.

Mezcal “rested” in a wood vessel of any type or size, for between two and 12 months.

Mezcal aged in any type of wooden vessel of less than 1000 liters for more than a year.

“Distilled with” – otherwise known as mezcales de pechuga. In this traditional process, a second or third distillation is done with other ingredients in the still itself. These may include regional fruits, meat,  herbs, etc.

Mezcal Production – this description is focused on the artisanal and ancestral mezcal of Oaxaca. 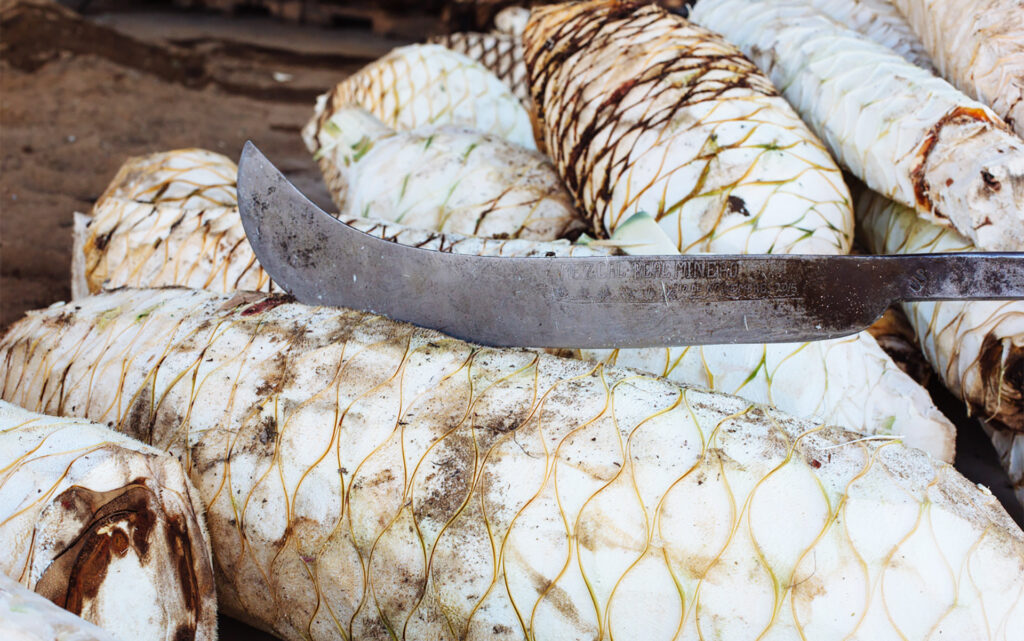 “Maguey” is the preferred term for agave in Oaxaca. The Norm allows any type of maguey to be used to make mezcal. It’s generally believed that there are close to 40 maguey varietals with enough potentially fermentable carbohydrates to be viable sources of mezcal. Maguey may be cultivated, semi-wild, or wild. In Oaxaca, the agave espadín (A. angustifolia Haw) is the most common maguey, and nearly always farmed. Truly wild magueyes are rapidly disappearing in Oaxaca, although it’s less of an issue in other mezcal-producing states. Semi-wild magueyes are planted (from seed or hijuelo) and left to fend for themselves until they are harvested years later. Maturation times vary depending on the maguey species, between five and 25 years. In Oaxaca, maguey is usually harvested with machetes. 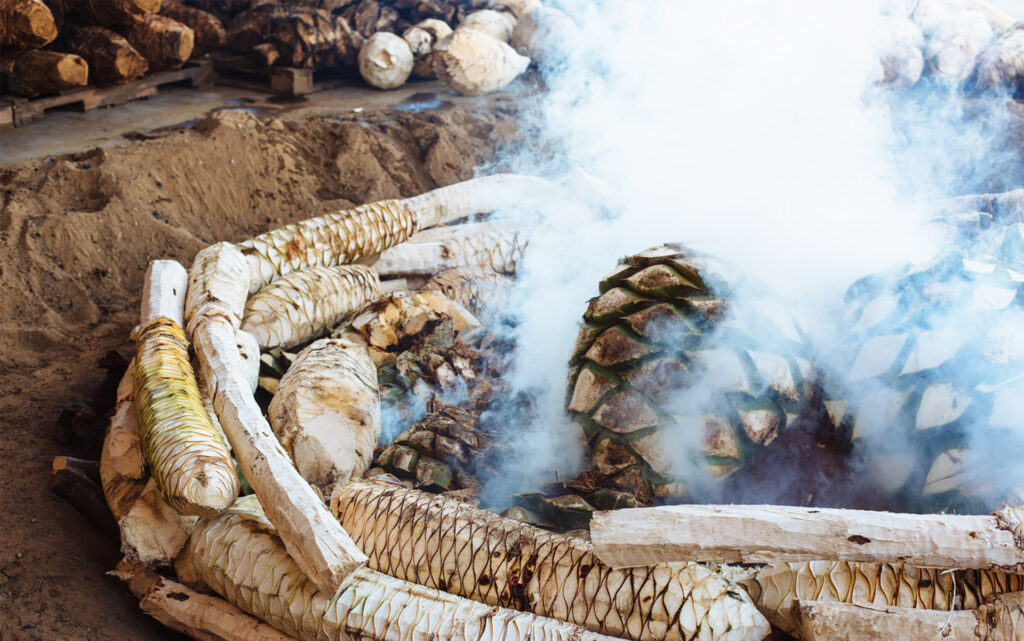 Artisanal and ancestral mezcal is cooked in an earthen or stone-lined underground pit. A bonfire is built at the base of the pit, and after the fire dies down, stones are piled on the red-hot embers. These stones are themselves covered with wet agave fiber. The pit is filled with maguey, which is also piled several feet above ground level. The mound is covered with straw mats or tarps, and then buried in earth. The heat radiating from the stones cooks the maguey over the course of several days. 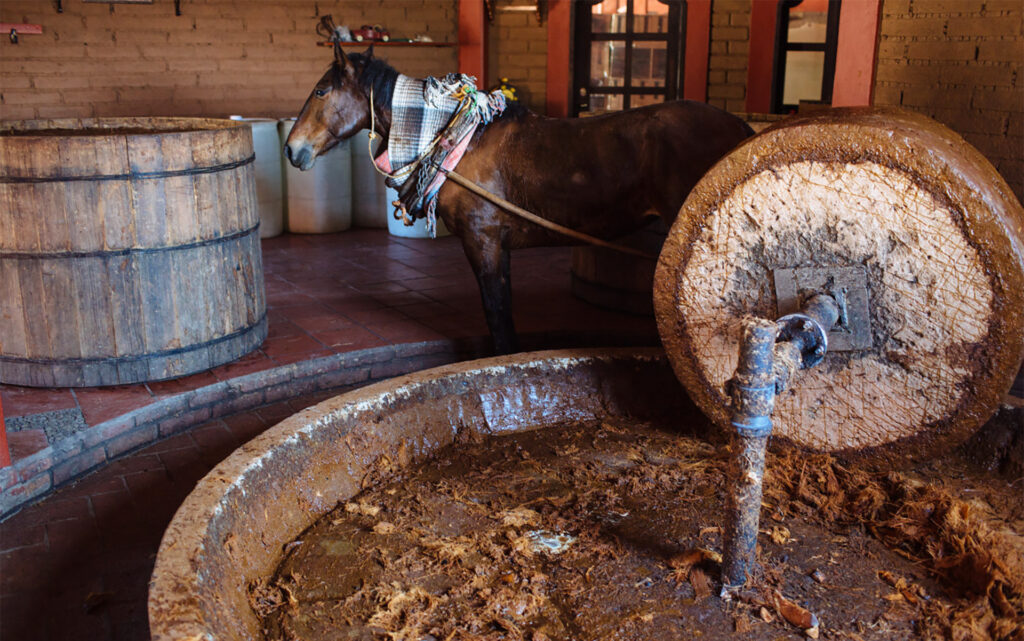 Once the cooked maguey has been removed from the oven, cooled, and sorted, it must be crushed. Maceration with a mule-drawn stone wheel (“Egyptian” or “Chilean” mills) and mechanical shredders are both common. Ancestral mezcales are crushed by hand with large wooden mallets. When the agave has been completely pulverized into fiber and wet pulp, it is ready for fermentation. 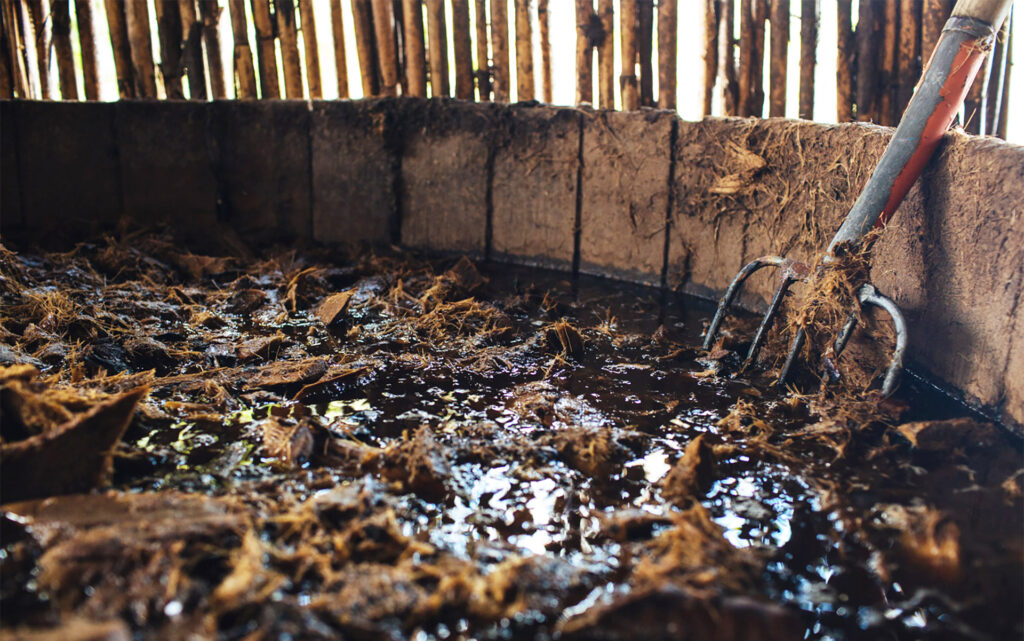 The crushed maguey will ferment naturally, with the addition of water. Fermentation generally takes one to four weeks, depending on factors like sugar content, temperature, altitude, frequency of fermentation in that palenque, and proximity to livestock. The use of commercial or even proprietary yeasts is rare, and frowned upon. Most mezcal is fermented by the ambient yeasts and microbes endemic to that palenque. Fermentation vats are usually made of wood, but stone, concrete, animal hide, and even plastic are also used. A traditional mezcalero will watch, listen to, smell, touch, and taste the fermenting mash more frequently as the sugar content drops and alcohol rises. The maestro’s five senses are the instruments used to determine when fermentation is complete. 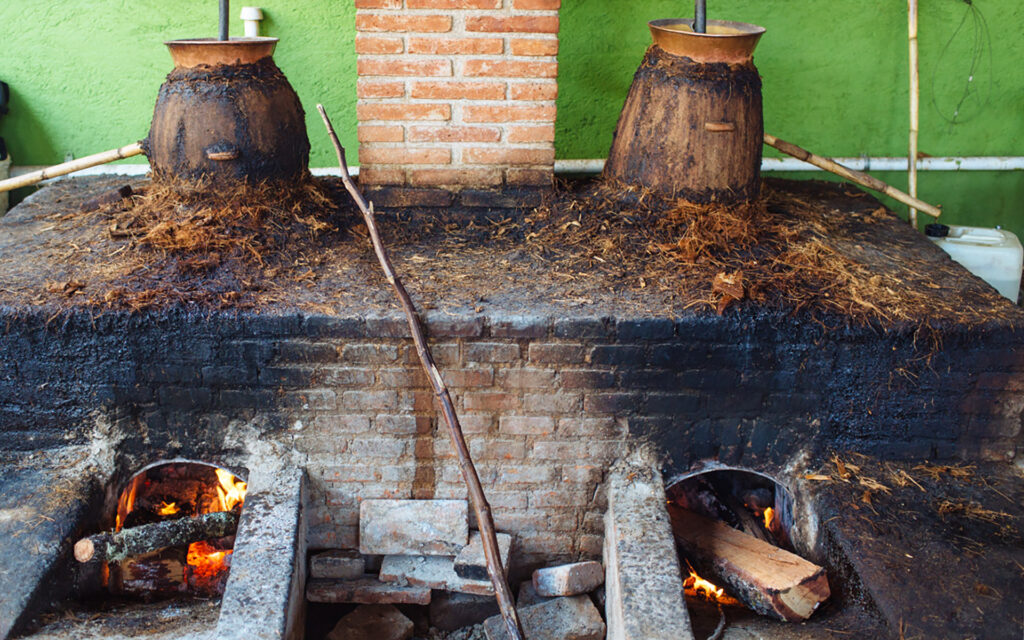 The fermented maguey—juice, fiber, and all—is now loaded into a still. In Oaxaca, there are three primary types of stills – copper alembics (the vast majority of artesanal mezcales), alembics with a refrescadera (a kind of mini-column, common in Miahuatlán), and so-called “Filipino” clay-pot stills. Mezcal may be distilled once, twice, or three times. But double-distillation is the Norm in Oaxaca and most of Mexico. The first distillation yields an impure liquid called ordinario, común, or shishe, depending on the region. This liquid is distilled a second time, and mezcal is born.

Abocado: Flavored or infused mezcal. One of the classes of mezcal as defined by the current Norm.

Agave: Scientific name for the genus of succulents used to make mezcal. The term maguey is strongly preferred in Oaxaca. Many mezcaleros see the term agave as an outside imposition, and/or referring to the blue agave used in tequila.

Alambic: A copper-pot still used to make artesanal mezcal. Its evaporation chamber is separated from its condensation chamber by a gooseneck.

Añejo: One of the classes of mezcal as defined by the Norm. Aged in wood for over a year.

Autoclave: A stainless steel pressure cooker that is permitted for producing the category “mezcal,” per the Norm.

Bagazo: Agave fiber left over after milling, fermentation, and distillation. It may be used to insulate the hot rocks of the pit oven, and to seal joints on clay-pot stills.

Blanco: One of the classes of mezcal as defined by the Norm. White mezcal, receiving no treatment after distillation. Also called joven.

Capón: Maguey whose flower stalk (quiote) has been severed (capado). Maguey capón is prized for its high sugar content and strong flavor.

Carrizo: A type of endemic bamboo, used as conduit in clay-pot distillation. Also used as a venecia to measure alcohol content.

Colas: “Tails” of distillation. Low in ethanol and high in methanol, they are commonly used to adjust the final alcohol content of mezcal.

Común: Liquid condensed from the first distillation of maguey juice. When re-distilled, it becomes mezcal. See also “shishe” and “ordinario.”

Diffusor: Machine used to extract juice from cooked maguey. Permitted for producing the category “mezcal,” per the Norm.

Ensamble: A mezcal made from two or more maguey varietals. The mixture occurs during fermentation. “Cold blends” (mixing different varieties of finished mezcal) are frowned upon. Some mezcaleros prefer the terms “blend” or “empalme.”

“Filipino” still: A simple still in which evaporation and distillation happen in a single chamber. So-called because of the possibility that the technology was introduced to Mexico by Filipinos in the sixteenth century.

Hijuelo: Rhizomes that grow from some maguey varietals. Clones of the parent plant, they are pulled up and re-planted in the spring.

Ingüixe: In some regions, refers to the very end of the tails of distillation. Not used for adjusting the final alcohol content of mezcal.

Joven: One of the classes of mezcal as defined by the Norm. White mezcal, receiving no treatment after distillation. Also called blanco, although joven is the traditional and preferred term.

Madurado en vidrio: “Matured in class.” One of the categories of mezcal as defined by the Norm.

Maguey: The preferred term for agave in Oaxaca. The Spanish conquistadores brought the word with them from Hispaniola.

Minero: Mezcal from Santa Catarina Minas, Ocotlán, Oaxaca. Because of its excellent reputation, the term has been co-opted by some commercializers who claim any “joven” is a “minero.”

Norm: In this context, “the mezcal Norm”- NOM-070-SCFI-2016, Alcoholic Beverages- Mezcal- Specifications. The current Norm came into effect in 2017.

Ordinario: Liquid condensed from the first distillation of maguey juice. When re-distilled, it becomes mezcal. See also “común” and “shishe.”

Palenque: A mezcal distillery, often part of the mezcalero’s home or property.

Pechuga: Meaning “(poultry) breast,” a traditional mezcal style in which poultry, other meat, and/or local fruits and spices are present in the final distillation. Defined as the “Destilado con” class in the Norm.

Penca: Spiky leaf of the maguey.

Perlas: “Pearls” – the bubbles that form on the surface of mezcal between approximately 45% and 55% alcohol by volume. A point of pride and mark of authenticity for many mezcaleros.

Piña: “Pineapple” – common name for the maguey stem that is harvested and cooked in mezcal production.

Puntas: “Points” or heads of distillation. Flavorful and high in alcohol, they are commonly used to adjust the final alcohol content of mezcal. They are sometimes consumed on their own.

Quiote: The inflorescence (flower stalk) that some agaves grow upon reaching maturity.

Reposado: One of the classes of mezcal as defined by the Norm. Aged in wood for between two and 12 months.

Shishe / Xixe: Regional name for the liquid condensed from the first distillation of maguey juice. When re-distilled, it becomes mezcal. See also “común” and “ordinario.”

Smoke: A flavor element in mezcal resulting from the wood used in earthen pit ovens and heating stills. Its predominance or overabundance in mezcal is considered a flaw.

Tepache: In this context, fermented maguey juice ready to be distilled.

Venecia: A tube made from carrizo for siphoning mezcal and measuring its perlas. The act of doing so is the verb veneci