Residents of Jalisco’s Highlands region awoke Thursday to a substantial blanket of snow and ice covering the ground and local crops, including the emblematic Highland blue agaves. Online social media quickly filled with stunning and beautiful images, and alteños young and old took advantage of the novel opportunity to make snowmen and snow angels – activities they usually only see in foreign movies.

Those younger than about 25 years had never seen snow locally before. Their parents, however, easily recalled the winter of 1997, when a similar winter blizzard brought snow to the region for the first time in a century. That literal storm was an early element in the metaphorical perfect storm that created the severe shortage and crisis in the blue agave industry in the early 2000s. As the snow and ice continue to melt today, agaveros, tequileros and observers throughout the region are holding their breath, waiting to see how bad the damage will be.

The blue agave has evolved for tens of thousands of years to survive extremes of heat and aridity. It is not native to the Jalisco Highlands, where it began to be planted only around the turn on the 20th century. The plants do not easily bear extended cold snaps, much less freezes like this. Extended low temperatures will “burn” the agaves’ tissues. Sugar content, necessary for Tequila production, can plummet. Agaves two years old and younger are particularly vulnerable, particularly if the cogollo (the top center portion of the plant, where new leaves emerge) is frozen.

Today I spoke with Dr. Adolfo Murillo, a Highlands native, organic agave farmer and owner of Tequila Alquimia, about what they’re seeing on their agave ranch in Agua Negra, on the outskirts of Arandas.

“Luckily for us, our fields are on the fringes of the state of Jalisco [near the Guanajuato border], where we get less rainfall in any given year. It turns out we also got less snow, “ said Murillo. “I’ve always said that the layout of the fields is very important. Agaves should be planted on a slope for good drainage, as ours are. Also, the slope should be toward the morning sun, so the agaves are warmed since early in the morning on cold mornings. Again by luck, in Agua Negra the sun began to shine early in the morning, so the snow that had fallen on our agave was melted off fairly quickly, and the agaves do not appear to have sustained any damage.”

Dr. Murillo explains that it doesn’t take long to assess the damage. Plants that have been sufficiently frozen will begin to wilt as they thaw, eventually drying out and rotting.

Industry veteran and Selección ArteNOM owner Jake Lustig remembers 1997 and the ensuing crisis period well. That freeze, and the ensuing vulnerability of the agaves to a variety of pests led to “widespread consolidation and surrendering of Mexico’s national spirit to multi-national conglomerates earning their capital in Tennessee whiskey, Puerto Rican rum or French vodka, who could sustain agave price fluctuations. Some folks without that ‘diversification’ went bankrupt and closed or sold out,” according to Lustig.

As the whole world begins to grapple with the reality of accelerated climate change, the Tequila industry will not be an exception. Dr. Murillo points out that this snowstorm is no fluke, but rather the latest incident in years of changing regional weather patterns including freezing temperatures as early as October, sporadic and unpredictable rain, and a general breakdown in the formerly predictable annual weather pattern of warm temperatures and near daily rain from July to September.

We should know a lot more about the severity of the damage to the agave crop in the coming weeks and months. In the meantime, you can be sure that thousands throughout Jalisco will be praying that the damage is light. Jake Lustig will be among them, signing off a recent message with this: “Let’s light a candle and hope that global warming trends pardon Mexico on this cycle and we don’t experience such dramatic losses.”

For continued updates on this situation, and all aspects of Tequila, sign up for our newsletter in the upper right hand margin of this page. Cover photo courtesy of Jenny Camarena.

As Tequila nerds, we love trivia. “How long does it take agave to mature? How long is añejo aged? Who first exported Tequila?” All too often, knowledge of these basic, rote facts is touted as expertise. The deeper questions of Tequila’s meaning(s), winners, losers and future trajectory are all too often sidestepped or not even considered. Marie Sarita Gaytán’s ¡Tequila! Distilling the Spirit of Mexico is a fantastic book that addresses these issues in a way that’s likely new for the non-academic Tequila fan.

¡Tequila! presents and analyzes Mexico’s most famous beverage as “a complex cultural commodity…first and foremost…about the people of Mexico.” The book is a critical cultural analysis of how and why Tequila came to be constructed as a potent symbol of Mexican national identity and its changing meanings throughout history and into contemporary times. Gaytán is a sociologist and although I am sure this book will be used in undergraduate university courses, the book is lucid, accessibly written and of interest to all Tequila aficionados.

While not attempting to be a thoroughgoing history, the book deftly connects the dots between important historical events and eras from the Spanish Conquest to the present. The first chapter, on the history of Tequila, mezcal, and pulque, is possibly the best summary in English that I’ve seen. Even if the rest of the book’s cultural theory loses more casual readers, this chapter should be required reading for anyone interested in Mexican beverages. The relationship of pulque – an indigenous, pre-Hispanic brew of fermented agave sap- to Tequila is widely misunderstood and misrepresented in the Tequila industry. Gaytán demonstrates how pulque was seen by the ruling Spanish (and later creoles) as “too native.” Its association with the rowdy, race-mixing masses of Mexico City made it inappropriate as a national icon. Since there was no way to stabilize and bottle it at the time, its geographical range of consumption was also limited.

This artful weaving of cultural and material factors is characteristic of Gaytán’s analysis. She draws upon both types of evidence to explain the “why” of Tequila. Why is it that, amongst Mexico’s scores of distilled spirits, the one from Tequila, Jalisco became a national emblem? In the post-Tequila Boom 21st century, it can be easy to forget that this was far from a foregone conclusion. The Tequila-soaked world in which we live is a very new reality. The first “Norm” governing Tequila production wasn’t published until 1949, Tequila became Mexico’s first Denomination of Origin product in 1974, the Tequila Regulatory Council was created only in 1994 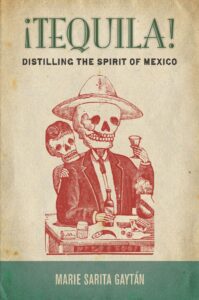 In explaining how Tequila came to be the globally recognized Mexican spirit, Gaytán analyses how Guadalajara and the Jalisco Highlands were deliberately juxtaposed to Mexico City as a “racially pure,” idyllic-yet-modern archetype for a new Mexican century and identity. The extermination of natives in Jalisco had been particularly effective, meaning there was a surplus of available land. Investment flowed into the region when precious metals were discovered, and the cultivation of agave was a cheap investment with a guaranteed payoff. Very often “why Tequila?” is treated as a mystery to which there is no real answer. It is gratifying to see material factors like the ascension of the Port of San Blas and the introduction of the railroad finally acknowledged in a serious way.

It isn’t news to anyone that Tequila is considered a symbol of Mexican national identity, an internationally recognized marker of “Mexicanness.” Gaytán’s analysis goes beyond the surface though, to explore the ways in which this symbol was constructed historically and how its meaning continues to be contested in ways that reflect upon social class, race and gender. If Tequila comes to represent a certain way of “being Mexican” or “doing Mexico,” that is necessarily at the exclusion of other potential ways of being and doing. In Gaytán’s analysis, “Mexicanness” itself is a contested category that would at times exclude the indigenous, urban poor and women.

A feminist gender analysis is present throughout the book – a long-overdue development given that popularly accessible books about Tequila have been overwhelmingly written by men. Gaytán addresses Tequila’s role in the construction of masculinity and femininity, using depictions of Pancho Villa, and the Golden Age of Mexican Cinema as rich sources of data. The chapter on Tequila in the comedia ranchera film genre is particularly rich, and is an excellent introduction to that crucial piece of Mexican culture.

This book will tear some people’s blinders off when it comes to the contemporary reality of Tequila. If you are content buying into marketing myths and not questioning the ethics behind the industry, this book will make you a bit uncomfortable. Gaytán’s analysis of Tequila’s tourism industry is particularly damning. She argues strongly that projects like La Ruta del Tequila, and the village’s “Pueblo Mágico” designation have all served to further concentrate resources in the hands of the industry’s largest players, to the detriment of small producers, farmers and local families. Likewise, her critique of the use of jimadores and the agave goddess Mayahuel to sell Tequila and elicit loyalty to the Tequila category provides necessary “next-level” understanding of the myths and realities of Tequila culture.

My only substantive criticism of this book is that a couple of the chapters (on Pancho Villa, and discussions on Tequila with current-day Mexican and Mexican-American drinkers) don’t feel as integrated as the rest. In particular, the interviews with consumers on the meaning of Tequila drinking was the only place in the book where the theoretical aspects felt rather forced, and where it seemed like grand conclusions were drawn from limited data.

The book is so strong though, that it did leave me wanting more. I’d love to see the gender analysis of Tequila’s cultural history brought to bear upon contemporary branding and consumption practices, as well as further qualitative research into the meaning of Tequila consumption amongst the international and multi-ethnic aficionado scene. Hopefully this book will inspire further writing in the same vein.

I highly recommend this insightful book to anyone with any interest or involvement in the Tequila industry. Regardless of your level of knowledge or experience, you’ll certainly learn something, have your assumptions challenged in a constructive way, and deepen your understanding of the culture of Tequila.