Residents of Jalisco’s Highlands region awoke Thursday to a substantial blanket of snow and ice covering the ground and local crops, including the emblematic Highland blue agaves. Online social media quickly filled with stunning and beautiful images, and alteños young and old took advantage of the novel opportunity to make snowmen and snow angels – activities they usually only see in foreign movies.

Those younger than about 25 years had never seen snow locally before. Their parents, however, easily recalled the winter of 1997, when a similar winter blizzard brought snow to the region for the first time in a century. That literal storm was an early element in the metaphorical perfect storm that created the severe shortage and crisis in the blue agave industry in the early 2000s. As the snow and ice continue to melt today, agaveros, tequileros and observers throughout the region are holding their breath, waiting to see how bad the damage will be.

The blue agave has evolved for tens of thousands of years to survive extremes of heat and aridity. It is not native to the Jalisco Highlands, where it began to be planted only around the turn on the 20th century. The plants do not easily bear extended cold snaps, much less freezes like this. Extended low temperatures will “burn” the agaves’ tissues. Sugar content, necessary for Tequila production, can plummet. Agaves two years old and younger are particularly vulnerable, particularly if the cogollo (the top center portion of the plant, where new leaves emerge) is frozen.

Today I spoke with Dr. Adolfo Murillo, a Highlands native, organic agave farmer and owner of Tequila Alquimia, about what they’re seeing on their agave ranch in Agua Negra, on the outskirts of Arandas.

“Luckily for us, our fields are on the fringes of the state of Jalisco [near the Guanajuato border], where we get less rainfall in any given year. It turns out we also got less snow, “ said Murillo. “I’ve always said that the layout of the fields is very important. Agaves should be planted on a slope for good drainage, as ours are. Also, the slope should be toward the morning sun, so the agaves are warmed since early in the morning on cold mornings. Again by luck, in Agua Negra the sun began to shine early in the morning, so the snow that had fallen on our agave was melted off fairly quickly, and the agaves do not appear to have sustained any damage.”

Dr. Murillo explains that it doesn’t take long to assess the damage. Plants that have been sufficiently frozen will begin to wilt as they thaw, eventually drying out and rotting.

Industry veteran and Selección ArteNOM owner Jake Lustig remembers 1997 and the ensuing crisis period well. That freeze, and the ensuing vulnerability of the agaves to a variety of pests led to “widespread consolidation and surrendering of Mexico’s national spirit to multi-national conglomerates earning their capital in Tennessee whiskey, Puerto Rican rum or French vodka, who could sustain agave price fluctuations. Some folks without that ‘diversification’ went bankrupt and closed or sold out,” according to Lustig.

As the whole world begins to grapple with the reality of accelerated climate change, the Tequila industry will not be an exception. Dr. Murillo points out that this snowstorm is no fluke, but rather the latest incident in years of changing regional weather patterns including freezing temperatures as early as October, sporadic and unpredictable rain, and a general breakdown in the formerly predictable annual weather pattern of warm temperatures and near daily rain from July to September.

We should know a lot more about the severity of the damage to the agave crop in the coming weeks and months. In the meantime, you can be sure that thousands throughout Jalisco will be praying that the damage is light. Jake Lustig will be among them, signing off a recent message with this: “Let’s light a candle and hope that global warming trends pardon Mexico on this cycle and we don’t experience such dramatic losses.”

For continued updates on this situation, and all aspects of Tequila, sign up for our newsletter in the upper right hand margin of this page. Cover photo courtesy of Jenny Camarena.

Jacob Lustig has been blazing his own trail in the spirits business for many years. When I first became aware of his Selección ArteNOM line of tequila, I thought “That’s a great idea!” When I saw that he had chosen three of my favorite distilleries to feature – NOMs 1146, 1414 and 1079 (now 1580)- I thought “I have to meet this guy!” What ensued was an hour long phone call while we were both traveling and the discovery of an agave brother from another mother. I can’t emphasize enough how much I respect Jake and what he does for tequila. Salud, amigo!

“Experience Tequila has drawn more people to the enjoyment of Mexico’s premier agave distillate by increasing product knowledge and popularity. Clayton’s pursuit of accurate, pertinent production details and dissemination to a growing body of enthusiasts fulfills a critical need in the continuously developing culture of tequila.

Congratulations Clayton, the first five years are the hardest!” 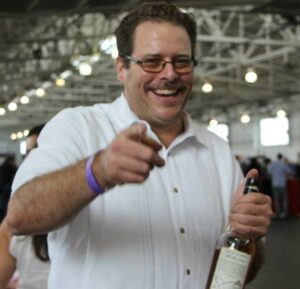 This testimonial is part of a series marking Experience Tequila’s fifth anniversary. If you would like to submit your own, we would love to hear from you! Simply email us.